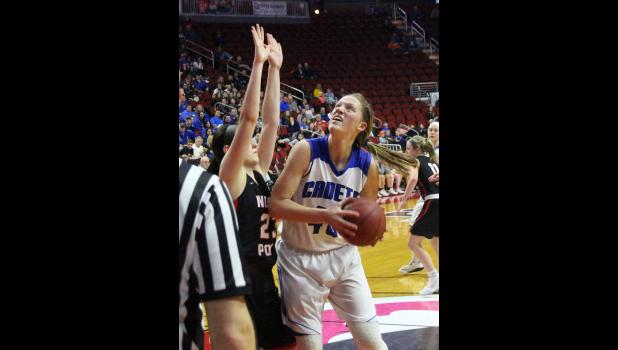 By:
Nate Troy Sports Editor
CRESCO - Crestwood junior Sharon Goodman recently announced on Twitter her verbal commitment to join the University of Iowa Women’s Basketball Team in 2020.
Goodman helped lead the Cadet girls’ basketball team to the 2018 Class 3A Basketball State Title with a 26-0 record. She also competed at the State Basketball Tournament in 2017.
During the 2017-18 girls’ basketball season, Goodman earned First Team All-State Honors from the Iowa Girls’ Coaches Association. She connected on 74.8 percent of her field goal attempts and 76.1 percent from the free throw line, averaged 19.9 points per game and 7.1 rebounds.
During the 2018 State Tournament, she grabbed All-Tournament honors. In three games at State, she averaged 24.3 points and 7.3 rebounds per game.
Former Crestwood Girls’ Basketball Head Coach Doug Sickles coached Sharon from 2016 to 2018.
“What got Sharon to the Division I level (for college sports) was her size, athletic ability, hard work and her talent,” Sickles said. “I am so proud and happy for Sharon. She really committed herself to basketball, and her hard work has paid off.
“Her growth as a player from a freshman to a sophomore really impressed me. Also, she was very coachable. You could tell her to work on a specific aspect, and she would do it. She’s a total team player,” Sickles said.