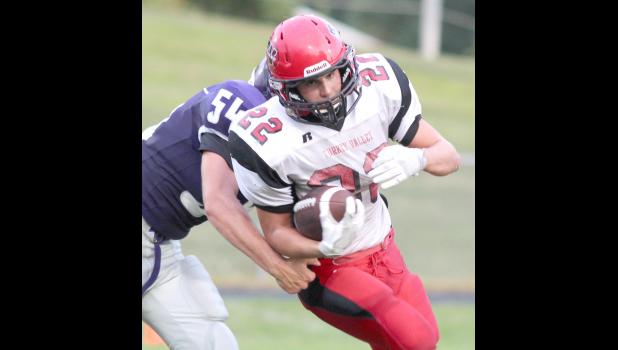 By:
Nate Troy
LANSING - A back-and-forth football game finished in Turkey Valley’s favor Friday in Lansing as the Trojans downed the Kee Hawks, 48-36, in the season opener for both teams.
The Trojans held a slim 14-12 lead after one period, took a 20-18 lead at intermission and grabbed a 34-30 edge going into the fourth before adding a late touchdown to seal the victory. Turkey Valley (1-0) will host West Central on Sept. 1.
“This was a learning experience for our young players,” TV Coach Mark Scott said. “The players kept playing hard on both sides. When we would get a score, Kee would answer back.”
The coach was proud of the effort his team gave for all four quarters.
“Our young offensive line fought hard against an older and experienced Kee line,” Scott said. “On defense, we gave up some big plays, but we played tough for most of the game. Ethan Leibold did a good job of throwing the ball on his first varsity start.
“Our senior backs ran the ball hard, and they fought for crucial extra yardage after contact. We will need to improve our execution and tackling as we prepare for district play,” Scott said.
Kee got on the scoreboard first before the Trojans tallied two touchdowns to go ahead 14-6. Will Einwalter grabbed a 37-yard touchdown pass from Ethan Leibold for the first score, and Braeden Baumler scored on a one-yard run. Baumler caught the two-point pass from Leibold after the first score.
Turkey Valley’s Cale Reicks caught a 21-yard touchdown pass from Leibold in the second quarter to give TV a 20-18 halftime edge.
The Trojans tacked on two scores in the third quarter. Baumler scored on a two-yard run, and he also ran the ball in for two points. Einwalter snagged a 33-yard pass from Leibold later in the period.
In the fourth, Turkey Valley added two more touchdowns. Leibold scored one a one-yard run, and Baumler reached paydirt on a 13-yard run. Einwalter caught the two-point pass from Leibold after the final touchdown.
TV statistics
Trojan quarterback Ethan Leibold completed seven of 13 pass attempts for 157 yards and three touchdowns.
Will Einwalter had three receptions for 110 yards and two scores. Cale Reicks caught three passes for 36 yards and one score. Braeden Baumler had one catch for 11 yards.
The Trojans racked up 248 yards rushing on 58 carries, good for an average of 4.3 yards per carry. Baumler led the way with 87 yards on 23 carries and had three touchdowns. Einwalter had 79 yards on 13 attempts. Cale Reicks had 59 yards on 12 carries. Leibold had 23 yards and one touchdown.
On defense, Cale Reicks led the Trojans with 14 total tackles, including 10 solo stops. Leibold had eight tackles, including six solo stops. Einwalter had 6.5 tackles. Kannon Leuenberger and Baumler each had five tackles. Luke Mueller had 3.5 tackles, and Dylan Elsbernd had three.
Cale Reicks had one punt for 27 yards.
Elsbernd had three kick returns for 10 yards. Cale Reicks had three kick returns for 67 yards. Einwalter had one kick return for 15 yards.