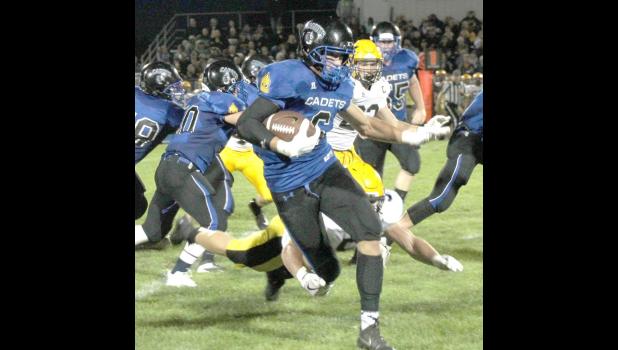 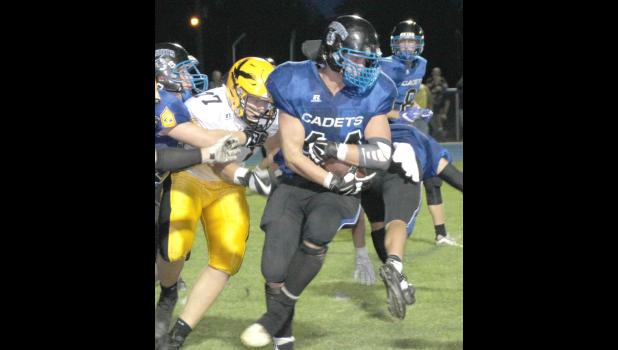 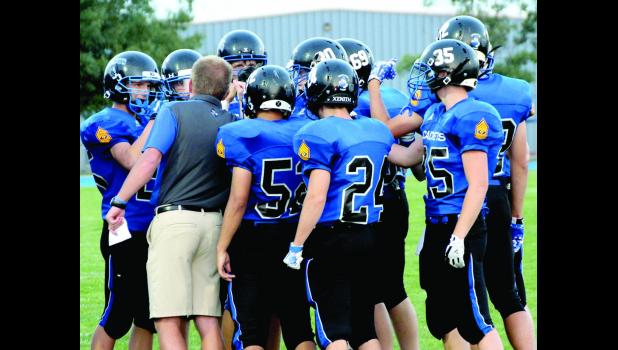 By:
Nate Troy
CRESCO -  Waverly-Shell Rock proved why it is one of the top football teams in Class 3A every season Friday as the Go-Hawks defeated the Crestwood Cadets, 55-0, Friday in Cresco during the season opener for both squads.
One of the positive aspects the Cadets can take from the game is that Friday’s contest was a non-district game. Crestwood will have one more non-district contest (Sept. 1 at Decorah) before it opens district play Sept. 8 at home against Hampton-Dumont.
The Go-Hawks took advantage of few Cadet miscues to grab a 21-0 at the end of the first quarter. Waverly-SR’s first score came shortly after a bad Crestwood punt gave the Go-Hawks the ball at the Cadets’ 17 yard line with 9:59 left in the first. Six plays later, quarterback Luke Velky completed a one-yard touchdown pass to Jordan Downing. Brandon Hinders kicked the extra point to give W-SR a 7-0 lead.
Two minutes later, W-SR capped a one-play drive when Velky completed a 29-yard touchdown pass to Braden Holmquist with 5:29 left. Hinders kicked the extra point to push the lead to 14-0.
A Cadet fumble on the next possession gave W-SR the ball at Crestwood’s 26-yard line. Nine plays later, Gabriel Santoiemma scored on a one-yard run with three seconds left in the period. Hinders nailed the kick to push the lead to 21-0.
Midway through the second quarter, the Go-Hawks extended the lead to 28-0 on a nine-yard strike from Velky to Dalton Epley with 4:44 left.
On the next possession, Crestwood moved the ball from its own four-yard line to the Go-Hawks’ 31 before W-SR defender Jack Seward picked off a Cadet pass at the 24-yard line and raced 76 yards to the end zone with no time left on the clock. Hinders hit the extra point to give W-SR a 35-0 halftime lead.
The Go-Hawks pushed their lead to 42-0 in the third on a two-yard run by Velky. In the fourth quarter, W-SR tacked on two scores. The first came on a 31-yard run by Ben Hemer, and the second score came on a 40-yard scamper by Aaron Dunn.
“We gave Waverly a short field (on its first two touchdown drives),” Cadet Coach Chris Lentz said. “They came after us and pinned their ears back. They have a little more speed than we do. Everything that could go bad (in the first half) went bad.
“Waverly had one good drive in the first half, and then we threw that pick-six (interception) late in the half. We had a few guys go down with injuries during the game, and we had some injuries during practices.
“We’re a thin team (in terms of team numbers), and our guys know that. We know that as a team, we need to stay healthy. Jon Henry had a hip dinger, but hopefully, he’ll be ready (to play against Decorah on Sept. 1),” Lentz said.
The coach noted he anticipated the game against Waverly-SR would be a difficult test.
“We’ve got a week to prepare for Decorah, and we’ll keep our heads up,” Lentz said. “We knew it would be a tough game. They (W-SR) have a solid football team. They’ve got three times as many players as we have.
“We said we’d use all of our players. Not to make any excuses, but tonight was the first (varsity) game for a lot of our kids. It’s a fast learning curve. We put their feet to the fire, and we got burned a little bit, but we’ll learn from this.
“District play is what really matters (in terms of qualifying for the playoffs). We need to stay healthy so we can go toe-to-toe (against our opponents) and give ourselves a shot. I wouldn’t write us off yet,” Lentz said.
The coach did find some positive aspects to take from the game.
“We did some nice things, and we ran some good plays,” Lentz said. “However, Waverly got up on us quick, so they were able to sell out on defense (by blitzing us). When they got up 21-0, they can blitz on every down.
“We moved the ball and had some good drives before we hurt ourselves. Our kids played hard. Losing like this hurts because we anticipated the game would be better in terms of the final score. Waverly has some big guys up front.
“At times, we showed some promise. We had some opportunities to make some big plays, but we had a few key errors. We’ll see how banged up we are from this game, and we’ll get ready to play Decorah. We just need to play good, solid football. We need to keep working hard, and I know our kids will do that. We always want to win (every game), but we need to learn from this game and keep getting better,” Lentz said.
Statistics
Waverly-SR finished with 301 total yards on offense, including 51 yards passing and 250 yards rushing. Crestwood tallied 137 total yards, including 41 yards passing and 96 yards rushing.
Jon Henry completed two of four passes for 28 yards. Chris Guest tallied 42 yards rushing, and Dawson Rasmusson had 32 yards rushing.
Gabriel Santoiemma led Waverly-Shell Rock with 69 yards rushing on 17 carries. Luke Velky tallied 64 yards rushing on six carries.
On defense, Shane Vokaty tallied 5.5 tackles, including four solo stops for the Cadets.